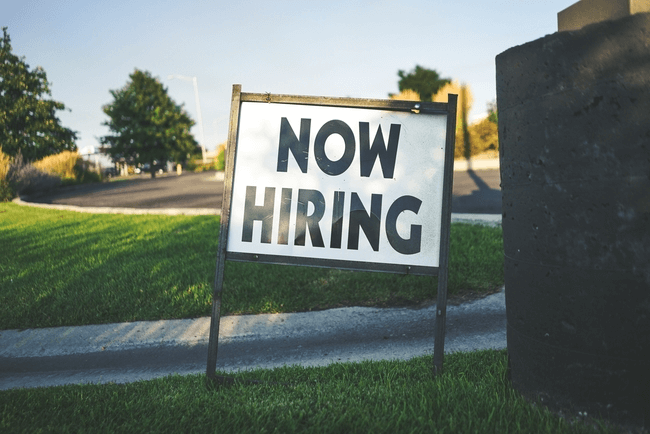 Rejection As Far As The Eye Can See

Rejection is hard. Spending hours scrolling through hundreds of job posts on job boards just to submit my resume into an abyss I rarely heard back from prepared me quite well for the online dating world.

Now that I get to spend some of my time writing articles on topics I find interesting I wanted to look under the hood and see what the deal was with job boards. I took a snapshot of data science jobs posted on Glassdoor, LinkedIn, and Indeed and came up with the answers to some of my questions (my methodology for getting the data is detailed below):

Which Data Science Job Board Should You Use?

The interactive chart above was created to help you understand which job board(s) you should use if you’re actively applying for a new data science job in any of the cities listed.

You want the most bang for your buck when you’re choosing which job board to use (if any at all). You want to start with the site that has the greatest coverage of different companies and job posts that are not from recruiting agencies. I chose the metrics in the chart above to help you decide where you should go if you want to use one of the big three job boards: 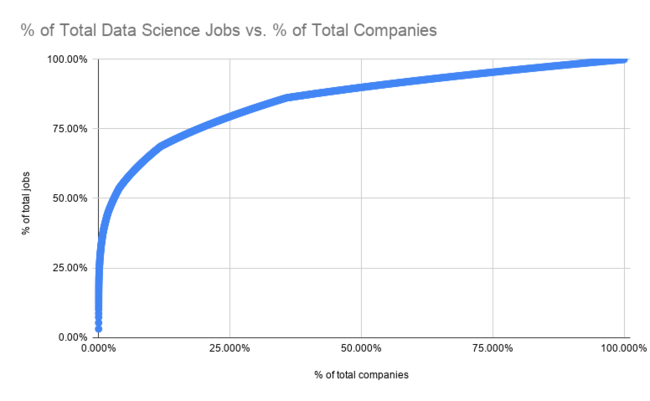 The alliterative title for this section took me WAY too long to come up with. Like I stated above, 10% of companies posted 66% of data science job openings and 20% of companies posted 76% of the jobs across Indeed, Glassdoor, and LinkedIn. This roughly follows the Pareto Principle. I’m always surprised how frequently the 80/20 rule bears out in real life.

Now it’s time to play a game. Which non-recruiting companies posted the most data science jobs on these job boards? (Cue Jeopardy music):

All of these companies paled in comparison to the total number of jobs posted by the recruiting agency Harnham. They accounted for a whopping 3.1% of all data science job posts on Indeed, Glassdoor, and LinkedIn.

As a side note, I wanted to mention how good Amazon is at SEO. If you Google “Data Science Jobs” Amazon is the only company not in the hiring space to rank on the first page. They link to a page where they show they’re hiring for 250 data scientist positions! This keyword gets roughly 12,000 searches in the US each month so they likely get a sizable number of applicants with this approach. 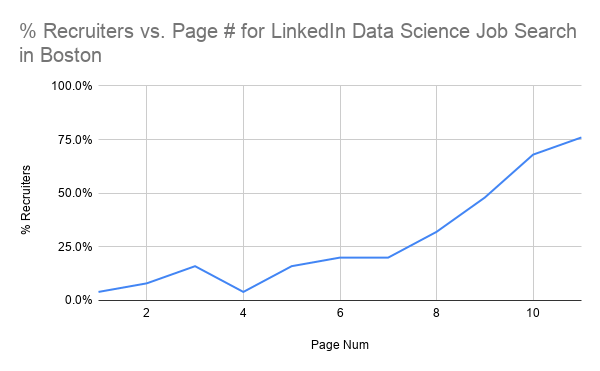 It is slim pickings for remote data science roles on LinkedIn, Glassdoor, and Indeed. I’m not sure if this is because full-time remote data science roles are just uncommon or if for some reason companies aren’t paying to sponsor these jobs on the job boards. Here are the total number of remote roles in the US for each of the job boards and for BeamJobs from non-recruiting companies:

You can see that our remote totals are higher than the job boards but still there aren’t as many roles as even the smallest city we collected data for. At BeamJobs we index jobs directly from company websites (it’s not pay to play) so it might just be the case that these jobs are few and far between. With that said, we’re still in the early days of our product so our remote coverage will only improve over time. 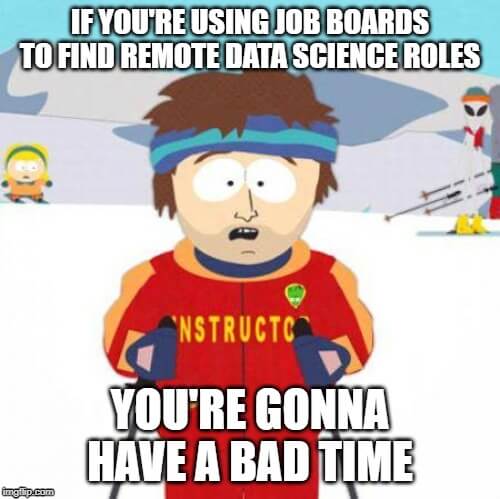 One of the most important lessons I learned from being a data analyst before starting BeamJobs is that data without concrete recommendations is not really that useful. Get the data, play around with it, and draw actionable conclusions from the analysis. With that said, if I were to recommend a job board for a data scientist to use I would recommend Glassdoor. I think the user interface is really pleasant, they have the lowest percentage of recruiting companies on the site, and their job coverage is solid. While all three job boards have quality issues in terms of some really bad job descriptions, anecdotally the quality on Glassdoor seems higher.

If you’re interested in a more curated job search experience use BeamJobs. We index thousands of data science and engineering jobs then handpick the five each month that best fit what you’re looking for. Since there is a human on the other end we won’t send recruiting agency jobs and we only send roles with compelling job descriptions.

The data I’m presenting here is a snapshot in time from November 17, 2019. That is, I looked at all of the data science jobs on Glassdoor, LinkedIn, and Indeed on that day in the cities listed in the chart above. How did I get this data? The good old fashioned way, manually. I’ve made a lot of mistakes since I started BeamJobs, one of which was engineering too early. So rather than build a scraper for this one-off analysis I spent about 15 hours getting all of the companies hiring for data science roles.

To execute my searches I filtered the jobs to contain the exact string “data scientist”, were full-time, and were within 10 miles of the city I was searching for. For remote roles I chose the location as “remote” based in the US. I did some minor processing of company names to standardize them across sites (for example removed the “Inc” from company names). 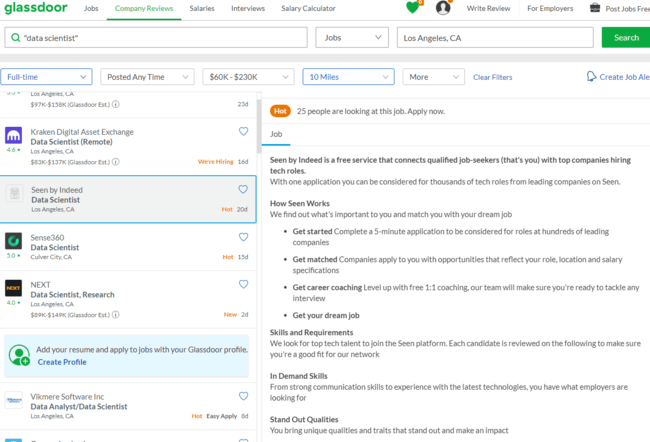